Temple of the three windows 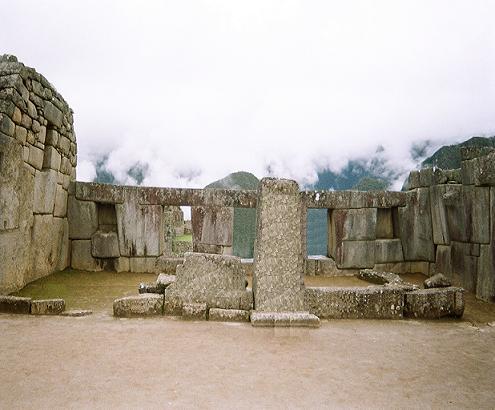 Temple of the three windows, the windows of the universe, Is marvelous how these structures are made to perfection and last forever, is one of the most beautiful places to visit, and is also a very important place due to hi nearness to the main square.

Just 3 of the 5 windows are remaining, and these 3 windows represent each part of the world: The underground (Uku-Pacha) the heaven (Hanan-Pacha) and the present or the actual time (Kay-Pacha). These windows also represent the rise of the sun, an important event in the everyday life of the Inca population.

Temple of the three windows is located at 80 km of the city of Cusco, on one side of the Vilcanota or Urubamba River, his construction have many theories, some belong to the popular folklore, and others are Historic.

The first theory got to do with the fact that this place was hiding from the Spanish at his arrive, because was a very important and sacred place. The other theory is that these 3 windows is a recreation of the Tamputocto Mountain, which, according to an ancient legend, was the place where the 3 Ayar brothers come out to found the Empire.

The historic facts are that many anthropological studies demonstrate that this place was known before Hiram Bingham arrives to the Sanctuary, take him away most of his credit, because there are 3 names are engraved on stone and the date is the July 14th of 1902.

This place was found by the Wenner gren scientific expedition that took place in the years of 1940-1942, at the lead of Paul Fejos, who after that leave the studies to gave to the Archaeologist Julio C. Tello the task of continue the work, calling this place Wiñaywayna, that mean Eternal youth or Forever Young.

It has many structures that are considered as baths, where the Inca clean his body and mind, and that baths had minerals that cured any kind of pain and sickness. The way that this was built, one can avoid the magnificence and precision of the carved stone so perfect that no razor blade, not even a hair could enter between the rocks that were put one on top of another.

Located at 3, 3 km from the Machu Picchu, to get to Wiñaywayna you must walk around 7km, and you can see many things like the Urubamba River, and the famous Inca trail, INTI Punku and many others.