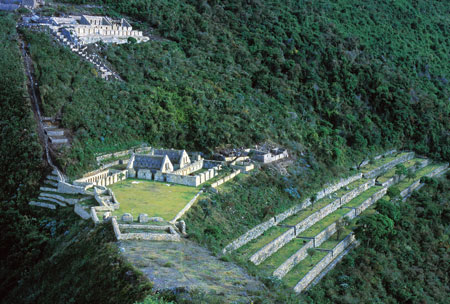 Choquequirao, the Golden cradle, This place is considered the Twin of Machu Picchu, for the resemblance that they have each other, similar architecture and structural, is another of the destinations of the Machu Picchu road.

Is located between the Salcantay snowcapped, to the north of the Apurímac River, on the province of Anta, in the department of Cusco.
It has many animal and flower species, animals like foxes, pumas, bears, the called Gallito de las rocas, and plants like Ichu, and many types of orchids completes the beautiful landscape.

It was a religious and cultural center for the entire region many studies demonstrate that Choquequirao was like a control gate, to get the access to Vilcambamba, one of the most important valleys in the perimeter. It mentioned that was an obligated zone to get through the jungle and the Imperial city of Cusco.

In 1834, the prefect of Cusco, José Maria Tejada went to Choquequirao, because he heard some stories about the gold that were lost in this place, and also Leonce Angrand made a cartography of the structures, but they all forgot about him and his plans. In the year that Hiram Bingham arrive to CUSCO, is just when the place acquire notoriety of the Historians, Archeologist and tourist.

The only way to reach for the Choquequirao complex is by terrestrial via, getting to the highway that leads you to Abancay and in the 154 km take a detour that leads to the Cachora Town. Starting from there, you can toward the hill, around 30 km, in wich route reach almost two days long. You can also accede through other towns, but the safest is by the mentioned highway.

Mild, due to his altitude, and is warm because the proximity to the Apurimac Canyon. You can visit every time of the year and every month.

Given the fauna and flora of the place, the tourist must be very careful to all that, and do not feed the animals and not cut any flower that exists, because you can bring the unbalanced to the land.

You can´t forget to bring adequate clothing, drinks and shoes so you can enjoy your whole trip.