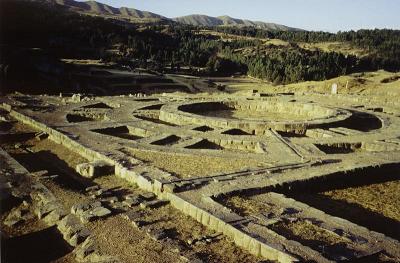 Muyucmarca, The round place,When the Spanish conquers arrive to the fortress, the chroniclers that write everything that happened misunderstood the name of the tower, change it for Muyumarca, and not Muyucmarca. Actually, the name that remains was Muyucmarca, due that the local natives cannot change his language by a foreign language, even after 500 years. Either way, both names are valid.

This is one of the most important towers in the Sacsayhuaman fortress, since that was a water deposit with canals on his side to the water can flow with no problems. The tours are many, so you must be sure of what of your travel packages tour are going to participate.

Inside of the tower of Muyucmarca, there was a series of ornaments that were made of gold and have images of the Constellations that The Incas used as guides.
Many Chroniclers said that these towers were a defensive place; Garcilaso de la Vega said that when he was a little boy he used to play on those towers until his destruction by the Spanish when they arrive. Pedro Pizarro, Francisco’s brother, said that there were only 2 towers; perhaps he didn’t see the Muyucmarca tower because this might have been destroyed by the Spanish on the battle of Sacsayhuaman.

In 1934 Luis Eduardo Valcarcel with a group of Archaeologist and Historians, with a permission of the City of Cusco excavates the place and found the rest of two of the three towers that were built on the Sacsayhuaman Fortress.

This tower took importance when Cahuide fight against the Spanish, his real name might have been Titu Cusi Huallpa, and other chronicles said that his name was Kullash. He was an Orejòn (a soldier who has on his ears big earrings that hang out from his ears, that’s why the name, and also is the name of the soldiers of Quito, where Huascar live at the arrive of the Spanish).

On May 6th of the year 1536, the battle of Sacsayhuaman took place in the fortress with the same name, and that is when Cahuide throws down to the Muyucmarca tower to immolate and sacrifice for his entire people.