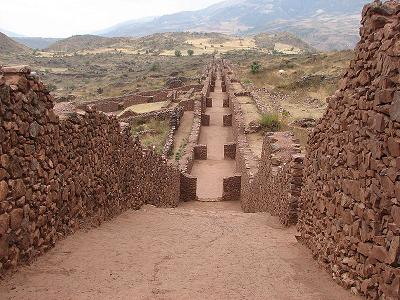 Pikillaqta, the flea town. Located on the Quispicanchis Province, with an altitude of 3350 meters above the sea level, is an archaeological site with many structures that were used for almost 2000 years

The name of the city comes from 2 Quechua words, Piki, which means flea, and llaqta, which means town, although this is not the first and original name of the town, even nobody knows how was called by the Incas. According to the XVth century, said that they heard names like Muyuna or Mohina, which means bend.

The first people who inhabited this site was the Wari culture, an empire that last around 400 years, until the Incas came and destroyed his city and reorganized to the benefit of the Tahuantinsuyo Empire.

Presents over 600 buildings, between canchas (which are fields open wide) and Tambos (storages), and many places where the people lived on the Inca times. Like is traditional in Wari and the Incas, cultures that were influenced each other, the design of the entire complex is geometric, containing over 10thousand persons living there.

Many sites were designated to function as a religious, administrative and political and even defensive against intruders. The walls that surround the complex were painting with plaster, and because of that, the whole complex could be a white town.

One of the most important discoveries on this site is that in the year of 1927, Justo Román Aparicio, a native of the town, made excavations on the complex, and found 40 little sculptures made of turquoise, and these pieces are exhibited on the Archaeological Museum of Cusco.

The town has no water; the only source of water is a 1km away from the city, the Wakarpay Lagoon. One folklorist woman called Alfonsina Barrionuevo mentioned that around the lack of water, there’s a Myth that involved a beautiful princess called Qori Tika ( golden flower) who decided help his people by said that the one who can bring water to his town, is going to marry her.

One brave prince appears, Paukar, who live in the heights, carry the aqueduct over the mountain, but couldn’t bring the water. The other man, Tuyasta, who lived on the low side of the mountain, also couldn’t bring the liquid element; and the third one, Sunqo Rumi he was successful, because he could bring water by built 2 aqueducts, and married with the beautiful Qori Tika. Until these days you can see 2 lines that represent the mentioned aqueducts.

¿How to get there?

On the 32km from the Cusco City, you can take the Highway that connects Puno and Arequipa. The towns that conformed Pikillaqta are Oropeza, Lucre and Andahuaylillas, near the Wakarpay lagoon.