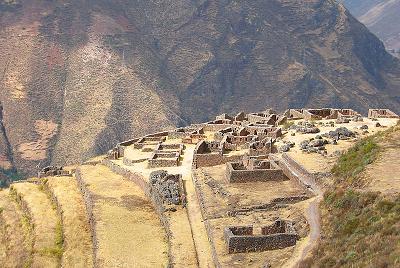 The community of Pisac is located at 33km from the city of Cusco, is one of the most important places in the Sacred Valley of the Incas. For more information, check you route on your travel all along the Valley.

Pisac is divided on 2 parts, the archaeological, wich is the ancient part located on the high side of the valley, and the contemporary, wich dates from colonial times, located at the low side of the valley itself.

Many stories are around this town, one of the most told is about the statue that is located at the main square: the legend said that a Inca chief called Huayllapuma had a daughter called Inquill, she has to be married by the one who can build a bridge over the Vilcanota or Urubamba River, the most and sacred River of the entire Valley. Asto Rimac, the brave prince, decide to make the bridge, with the condition that Inquill will not turn back, otherwise she will turned into stone, she couldn’t resists and she remain as a stone, even the prince finished the bridge. The statue is Inquill. This is a great Story that you can tell when you return from your travel vacation.

The Archaeological site is very old, and is divided into several parts

In ancient times, this structure was a kind of security, having among his blocks many huge rocks.
These walls have several gates, and the only ( one that has a threshold) is called AMARU PUNKU, wich means the snake gate.

There are two of them, the first one leads ahead to the north, and the other goes to the top of the valley.

Called Colcas, were big constructions with the function of keep the food and anything that they put to be conserved in time of flood or any kind of natural disaster.

Is a huge complex, with over 10 thousand tombs approximately. The Incas believe in the afterlife, and that’s why they wrapped his mummies with everything that the person used in her life, food, jewels, weapons, etc.