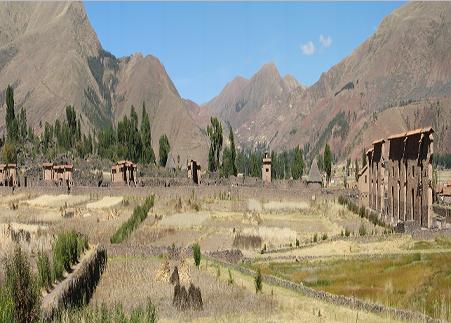 Is located in the San Pedro de Cancha District, in Cusco an at altitude of 3460 meter above the sea level. Raqchi is very important as an archaeological place, since that has many functions during the Inca times, and is not very visited by the tourists because is not mentioned in many travel agencies.

The archeological site of Raqchi has a very ancient date, even the majority of his constructions are from the Wiracocha period, many archeologist date this place from 200 B.D. approximately, almost 2000 years of occupation, they found many pottery and other artifacts related with the cultures that settles on this location.

One of the main attractions in the structures that were dedicated to the Inca Wiracocha, and later Pachacutec Inca made to reformed this place (1431 approx.), to finished the constructions with the Tupac Inca Yupanqui Inca, around 1471-1493.

According to Pedro Cieza de León, the so-called prince of the chroniclers said that there was a legend told between the citizens of Raqchi. The temple made in honor of the God Wiracocha after a man appears that was miraculous, but the people of the town was not paying attention and decided to ignore him, throw him stones, and after that a rain of fire occurred, and the people of the town decided to leave him alone.

That man went to the ocean and disappears, the people never knew who was that man, and in honor to him they made a temple and a sculpture; when the Spanish arrive to this place they thought that this sculpture was a saint that pass through that place.

The place was full of lava, and maybe that explain the rain of fire, because there is a volcano near the site, called Kinsachata.

This is the most important place of the whole complex, is a big construction, one of his kind, his dimensions are 25.5 meters wide, and 92 mts long and at least 15 mts tall, presents 3 walls, the first meters was made of rock, and the rest of the walls was made of adobe, a kind of material very common on this provinces.

What was the function of the place?

Since is a very unique construction, this place has many functions, like religious, because the God Wiracocha was one of the most important deities of the Inca Empire, he was the creator of the world; Administrative place: His place was strategically located to be able to controlled all the productions of food and ceramics, Storage function: The called Tambos was an important place to keep the production safe, and finally Military function: The presence of the houses of the Chasquis (mailmen) and the big walls, notice that this place was used for the training of the mentioned messengers.

Raqchi is a very small town, where the people dedicated to make pottery and textiles, have a peaceful and calm life, and recently they have a few houses where you can recreate the experience of living there, helping to the farmers and do many other things, with a great service that you will never forget.

This festival was celebrated since 1968, and tries to revalorize all of his traditions, like dances and recreate many ceremonies that date from the Inca times. Many tourists come to participate, and add to their list while they do his travel vacation and enjoy to the whole ceremony.

This festival starts on the second week of June, and it performs near the construction of Wiracocha, and it coincides with the festivities of the Inti Raymi, another important celebration in the Inca universe.

Dry and mild on winter and fall seasons, from April to October, and rainy and moist through all summer and spring. On the day and night the temperature are varied, from the 12 and 20 degrees, until the 0 degrees.

How to get to Raqchi?

It can make by two roads, one is by the Cusco-Arequipa-Puno Highway, and by train is the same trajectory (Cusco-Arequipa-Puno). There’s a ticket booth so you can pay 5 soles adults, and 3 soles students. The Raqchi town has many services like Hostels, commissary, medical post, Internet connection and many others.