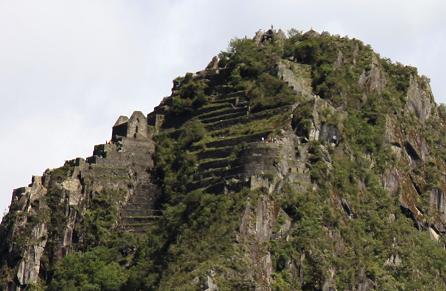 Huayna Picchu, The Young mountain, this particular mountain is one of the several rock formations wich are one of the destinations when the tourist arrives to the Machu Picchu Sanctuary.
Is famous for being the background of many of the pictures took by the tourist, is also have many archeological ruins of very importance for the studies of the zone. According to many studies, the top of the mountain were the seat of the virgins (Acllas) and the superior priest, and every day they worshiped His principal Deity: The sun (INTI)

Walking into the top of the mountain

A road that starts in the north part of Machu Picchu gets through the path that connects the Machu Picchu and Huayna Picchu mountains. After that the road becomes two, the right path leads to the top of Huayna Picchu.

This road is narrow and soaring due to his constructions, it includes several steps carved in the stone to the edge itself on the side of the wall. On the top of the mountain there are Inca constructions that according to the studies was the called seat of the Inca, and from that point you can see the great view of the Urubamba River, and the Salcantay snowcapped, worshiped by the Incas, because this was the point of what the water comes from, giving life to all the people, animals and plant.

The temple of the moon

The other path of the road leads you to these magnificent caves, and one of this is the famous temple of the moon, wich is built and carved from the stone that lies there, their shapes are geometrical (Trapezoids, rhomboids, etc.).

Many Historians and archeologist said that his functions are unknown, but it must be a place where the elite gathered to celebrate some rituals and ceremonies. Other caves like the temple of the sun, the three windows cave and the condor´s temple are very significant and important to the Inca Empire. How and when visit Huayna Picchu Time: When it’s raining season, the path is closed, because is dangerous climb up there.

How and when visit Huayna Picchu

Time: When it’s raining season, the path is closed, because is dangerous climb up there.

How to get there

The number of people that is allowed to climb is around 400, in times of 200 persons by time.

The whole climb last approximately 1 hour, depends on your physical conditions, is not recommended that people with poor physic strength climb the entire road.

Is necessary carry a backpack with the things that you’re going to use, like bottles of water, a good pair of shoes, clothing according to the season, canned food like tuna, bread and fruit to not lose water and not being dehydrated.

Before climbing, is necessary make some stretch exercises to be more agile and be able to climb and reach for the top of the mountain.

You also can write us at: travel@machupicchu.info

Packages start at USD$1,239 for our 4-day Cusco & Machu Picchu package (with domestic flights included.)
We specialize in complete travel packages that allow you to enjoy your travels while we handle the logistics.
Services are available as part of a full itinerary (3-days or more) including all hotels, tours and ground transportation.