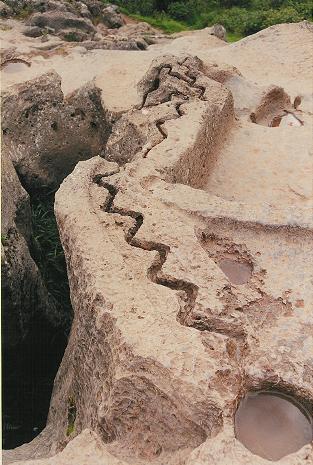 Kenko, the ancient maze, Kenko or Kenqo, located at 3800 meters above the sea level is a huge rocky complex, that resembled to a big maze, for his zigzagging structures, is composed for 2 places, Kenko Grande (big), where there are the following stages:

It was a temple to celebrate public rituals, is a semicircular place with 19 niches that is distributed along their walls, many studies said that these niches were seats where the participants might be sit , although recent discoveries said that it could be part of a big wall.

The place is very destroyed since the extirpator of idolatries, who were the persons who was dedicated to eliminate the called devil rituals and ceremonies.

This stone leads to the top of the entire complex, and that is where began the maze, with a hole that goes down to after separated in two, this place have might be a ritual joint, to pour the sacred drink called Chicha and sacrificed llamas to their deity.

It was an observatory, where the persona worshiped the sun, the moon and the stars, his faithful guides to all his rituals and ceremonies.

Cusilluchayoc, the temple of the monkeys

Is a rock complex that has the size of almost 2 mt long, where many people think that they can see a frog, and also you can see some snakes and monkey forms that maybe is where the name come from.

Was the place where the liquid, maybe blood of sacrificed animals, people, o just Chicha were left, is near to the Intihuatana or solar clock.

This is one of the places with more mystery and fascination, the stones that were carved are a very work of engineering, and the place was dedicated to secrets and hide rituals and sacrifices.

Due to his actual state, is very deteriorate than Kenko Grande, you can see a few things, nothing exciting. However, this site is a place with many visits, so you can’t reject on your travel vacation.