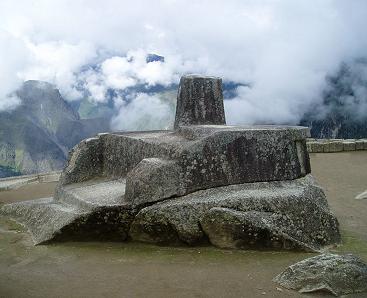 Intihuatana, the place when the sun gets tied, It was a religious construction, conformed of 4 sides, considering like the 4 cardinals points (north, south, east and west) located at the top of the sacred mountain, after climbing around 70 steps, is a wonder of the ancient technology, given the fact that was a kind of clock to measure when was the time to celebrate the winter solstice, called by the Incas INTI Raymi, one of the most important celebrations and rituals of the entire Empire.

This ceremony consist on make some kind of pray to the Sun, his almighty God, to no leave them for the harvest time, and in a symbolic way, keep or tie the sun to that beautiful rock, and on that precise moment, the priest put his hands on the rock and pray for many years of prosperity.

There are 2 Intihuatanas or solar clocks; one located is Pisac and the mentioned located on the Sacred Mountain. On September of 2000, a beer company was making a commercial, and one of the cranes hit the solar clock, breaking some part of the point, leaving in a terrible condition, The National Institute of Culture (INC) sued the company for the damages in 2005.

This is the place where the energy is in the air, according to many tourists, toy can touch the stone and really feels the energy through your body, and recharged of full positive vibrations, so you can continue your trip to the most high point of the Sanctuary.

Many mysteries are written around the Stone, they tie the Sun, because if the Sun goes out his life will be finished, and the Sun brings the life to all creatures, is the light of the life.