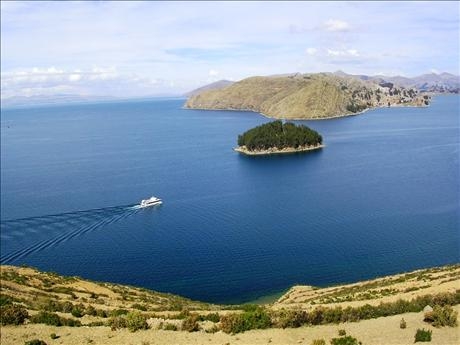 The Titicaca Lake: The Mount of the Puma . The name Titicaca comes from the two Quechua words Titi which means Puma and Caca which means mount, this name is a reminder of the felines that lived many centuries ago in the vicinity of the territory. One peculiar thing is that according to the natives who lives near the lake, said that if you put the map of the lake upside-down has the shape of a puma eating a hare, trying to search a relation between the names of the lake.

This theory has a strong value because many of the boats that are located in the lake have puma mask on their prows, these mask are made of totora, a vegetal material that is used in the everyday life of the local natives, including their houses, floors, since the place where the local live are floating island made of totora.

Who lived around the lake?

In pre-Inca times one of the cultures that inhabited around the lake was the Chiripa culture, they lived in the south side of the lake, leaving many archaeological sites of ceremonial type.

To the north of the lake, the Pucará culture was another town that lives near the lake, who domesticated Llamas another southamerican camelids. In this place is were many of the tubercles were domesticated a long time ago, served as food for centuries until our days.

The beginning of the Incas starts with a mythical legend, according to many chroniclers, the first two Incas that ever exist came out from the Titicaca Lake, send by his father and creator, the Sun (Inti).

The creation of the Viceroyalty was the beginning of the control of the Spanish authorities (1542) until 1777, year that was created the Viceroyalty of Río de la Plata, becoming part of this new State.

When the army of San Martin came to Perú, the lake become binational, divided between Perú and Bolivia (1825).

The Titicaca Lake is located in the plateau of the central Andes, with an altitude of 3812 meters over the sea level, between the countries of Perú and Bolivia, with an extension of 8562km, with a depth of 281 meters. The Lake is divided in two parts: The major lake called Chucuito, with a surface of 6450km, and the minor Lake called Huiñamarca with a surface of 2112km. Is the tallest and navigable lake in the world and is the 19th lake with his surface.

The majority of animals that live in the lake are duck, parihuanas and guallatas. Among the fishes are the trout, suche, and the carachi, and the only amphibian is the giant frog that lives near the lake.

The flora consists of aquatic plants (12 varieties) and the famous totora, which exist and is used in many ways.

The terrestrial animal that lives is Foxes, guinea pigs, among others.

Textile art on the Taquile Island: This is a great experience to see what could have be living many centuries ago, the women of Taquile still preserved the techniques of sew and spin the fabric use on his creations. More Information >>>

Uros, the floating islands: One of the most peculiar people lives here, they made from scratch these islands, using the once again mentioned totora, they take advantage of this vegetal in every kind of shapes, using also to create the totora horses, a kind of boat that float gracefully on the waters of the lake.