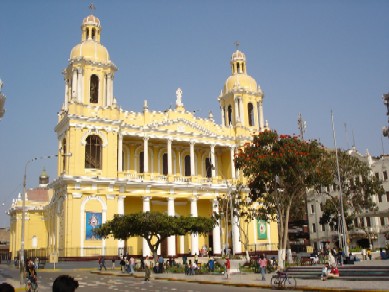 Chiclayo and the lord of Sipán

Chiclayo is a city located at the northeast of Perú, capital of the Lambayeque department, is the fourth city with more habitants, with over 583.159 habitants.

There are a lot of versions about the origin of the name, one of them is the name of a native governor called Chiclayoc, and another version is that there was a fruit called Chiclayep, which in Muchik language means the green that hangs.

One of the most important and representatives of the ancient Perú was born on this side of the region, developing between the centuries I and VI b.d, occupying what is now the north of Perú.. This culture had knowledge about hydraulic engineering, taking advantage of the rivers to the irrigation of their lands. They were the best ceramist in the entire territory, represented figures like priest, warriors, and animals, made also what the Archaeologist called Huaco retratos, ceramic made with such a realistic style that one can’t lead them.

Another culture that blossom in this region the Sicán culture, starting to manifest between the VII-XIV bd, forming by the decadence of the Mochica civilization, absorbing huge part of the knowledge that the Mochicas had. They stand out on architecture, goldsmithing and ship craft work. All of these cultures disappear because of a phenomenon called El Niño, which is water current so strong that destroy everything on his path.

The land where the city begins to grow was inhabited by the Cinto and Collique Ethnic groups. In 1585 the Spanish crown sends to build a Franciscan church, calling the Santa María de la Concepción Del Valle de Chiclayo, with the goal of evangelized the natives that live in the region.

During the independence period, Chiclayo supports the freedom spirit of the Argentinean General José de San Martín. Chiclayo was elevated to the category of Valley in 1827, and 8 years later was elevated to the degree of City by the President Felipe Santiago Salaverry, receiving the title of Heroic City. That is the period when Chiclayo starts his growth and be an important part of the new country.

It has a semi-tropical weather, with a nice temperature, dry and rarely rains, because of the strong wind that comes during the entire year, presenting every 7 or 1o years very high temperatures, with regular rains and the augment of the rivers.

How to get to Chiclayo

The city counts with the International Airport Captain José Abelardo Quiñones, gathers mainly to the national airlines, there are 4 airlines that brings daily services, in the morning and the afternoon, the most frequently flights are to Tumbes and rarely to the city of Iquitos.

Because of his location, Chiclayo is the connection point of many cities, specially in the north and north east of the country, counting with different bus enterprises that bring their services to Lima, Trujillo, Cajamarca an others.

Is located at the center of the city, his font has 3 valves that when the water flows, form the Peruvian flag.

Was conceived by the constructor of the Eiffel Tower, Gustav Eiffel on 1869, is one of the most beautiful constructions in the north of the country. Stands out the wooden work of Christ and the Antonio’s house.

Built on 1919, it has the republican style of the time, was destroyed by a fire cause by the major and his tenant. In 2006 was rebuilt, and now function as a museum.

Is one of the best and modern structures in the country, although his book Collection is poor and simple, has no internet services and multimedia material.

The Historic Sanctuary of the Pomac forest

Is located on the Ferreñafe Province, is considered a forest because of the conservation of the site, being the most representative area of the eco-region, on his carob vegetal formation.

It was declared Cultural and national patrimony, on January 16 of 2006.

Is one of the driest forest in the world, during the day is dry, warm and sunny on the afternoon and with regular winds. During the months of December and April shows sporadic rains.

Inside of the Forest, there’s the Archaeological complex of Sicán, which means house of the moon.

Principal attractions of the forest

Is a tree with a capricious shape of big height and age, consist of the icon of the forest, because is attributed many miracles and fantastic facts, despite of his hard conditions, it’s still living and producing.

From there you can see the majestic and extensive forest with his 34 pyramids that are conserved inside of the Sanctuary.

He was the promoter of the honey bee of this region, where you can see the recreation of some of the work that is occurred.

The national Museum of Sicán

It was inaugurated on March 20 of 2001, as a result of 2 decades of research in the Historic Sanctuary of Pomac. Has a structure that has a pyramidal shape, which reminds of the best pyramids that were built during the splendor of the Sicán culture.

Is located on the Ferreñafe city, to 20 km of the city of Chiclayo, the time of attention is from 9am-5pm, from Tuesday to Sunday, and also holidays.

The Lord of Sipán

This one of the most fascinating findings in the History of Perú, because of way he was buried and the pieces that he was found. Walter Alva, Peruvian archaeologist was who discover the royal tomb in 1987, the lord was found without signs of being plundered, it’s been said the he was one of the few governors that is found intact.

Is was located on the Sipán center, belong to the Zaña district, this governor was part of the Mochica Culture, culture that worship to their god Aia Paec, and also they worship to the sun and the moon.

However, the origin of the Lord of Sipán is still on discussion, because the Japanese Archaeologist Izumi Shimada has a new theory, which includes a new culture, Lambayeque, which is different to the Mochica, this culture worship to their main deity Naylamp, which has a mythological origin.

The clothing of this warrior and governor is one of the most beautiful pieces of art in the entire country, and also the jewelry that he was buried has no compare with anything in the world. Over 400 pieces of jewelry, counting helmets, scepter, all made of gold and silver.

Inside of the funerary complex, was found the rest of an ancient priest and below him was found the tomb of the old Sipán lord. In total there were 3 important people, the Lord of Sipán, the priest and the old Sipán lord, along with 3 younger women, 2 Llamas, and a guardian, that on his believes they thought that the afterlife was a places like the earth, but with immortal essence.

The Museum Royal Tombs of Sipán

Open in 2002, is located on the Lambayeque Department, his architecture style is inspired by the Pyramids of the Mochica Culture.

This museum has one of the best gold collections, with over 2 thousand gold pieces. The construction of the museum if very modern and shows how is that the care of a ancestor is very important for the community and also for the country, that attracts many tourist throughout the year.

The importance of the Lord of Sipán is see how powerful and adored was this governor, and how was the status between the citizens of that time and period. It shows how the people lived, and being considered semi-gods to the people.

The museum receives 300 persons by hour, is open 10 hour a day, from Tuesday to Sunday.