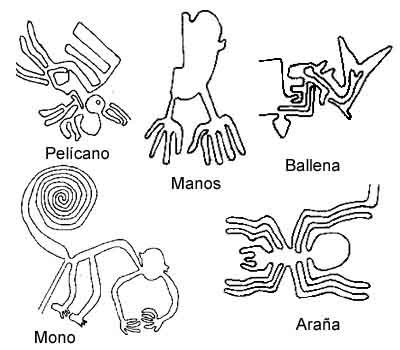 Nazca Lines, The mystery behind the pictures

The Nazca Lines are a group of traces that are located in the Jumana pampas, on the Nazca desert, between the towns of Nazca and Palpa, they were draw by the Nazca culture, and there are hundreds of these lines, from geometric figures to zoomorphic, fitomorphics that are draw on the land surface.

The territory where the Lines are were populated 10000 years ago, on this site develop many cultures, like Paracas and Nazca and the Tiahuanaco coastal. The land where the lines are covers an extension of 520km, and some of the lines are extended over 800km.

The altitude of the Pampas is 330 meters above the sea level, maintaining a temperature of 25 degrees annually, being one of the driest zones of the planet, quality that helps to conserved the lines, and also the air functions as a barrier that avoid the lines being erased, because makes the air change his direction.

The Nazca lines, according to many studies, are perfect; since the extension of the lines, the people who made it could be wrong, but his precision is amazing and still disconcert to these days.

The Nazca culture might have use strings to no deviate from the traces of the lines, drawing over 800 animal figures, with little models to later translate to the big draw in the land, and other thing is because is not raining at all, this could be the major reason why the lines are not erased.

The lines are not jus only seen by air, it can be seen trekking the hills that surround the Lines, and in fact they were discovered by the Peruvian Archaeologist Toribio MejÃ­a Xesspe, who see them while he was hiking some of the hills.

One of the first persons who saw the Lines were the Spanish chronicler Pedro Cieza de LeÃ³n in 1547, who said that he saw signs on some parts of the dessert that covers Nazca.

In modern times, other people who saw the Lines were military pilots and Peruvian civilians. In 1932 Julio C. Tello concluded that these lines might have been plain roads. Max Uhle, who dedicated 60 years to this site, said that these lines are a giant agricultural calendar.

In 1996 The Switzerland foundation to Archaeologist researches, leading by Markus Reindel and Johny Isla Cuadrado, these two Archaeologists have found over 650 sites and give them to the draws a scientist meaning.

The geometric lines are still a mystery, because the traces are so perfect to be over 2 thousand years old, and what amazed are the pictures of birds like Hummingbirds, Condors, Cranes, Seagulls, Parrots, among others.

Other animals like monkeys, spiders are such an iconic images for the Peruvians and the world. But the one who still is a entire Mystery is the picture of a man who could be waving, because this picture starts what many people called the Ancient Aliens Theory, who said that the Nazca culture might have been received influence and help from out space, Theory that was part of a book written by Erich Von Daniken, Chariots of the Gods, who said that the Geometric lines might be a track landing to the space ships.

This theory soon was refuted by the scientist community because is impossible that a Monkey figure or a Hummingbird could be use a platform to the aliens.

Maria Reiche, the Lady of the Pampa

This woman dedicated almost all of his life to preserved, study and takes care of the Nazca Lines, starting as a assistant of Paul Kosok, an North American scientist, who encourage to study the Lines in 1946 until her dead in 1998.

Reiche reach to the conclusion that the Nazca Lines were an agricultural calendar, perhaps the biggest of all, saying that the Nazca people used these draws, guiding by the stars movement to know hoe was the best time to harvest, and when it was raining.

One peculiar thing is that Maria Reiche lost a finger when he was working is Cusco as a teacher, and when he came to the Nazca dessert, she realized that the monkey figure have 9 finger, that episode marked her in a deep way, and she starts to care about the lines with so much passion and dedication.