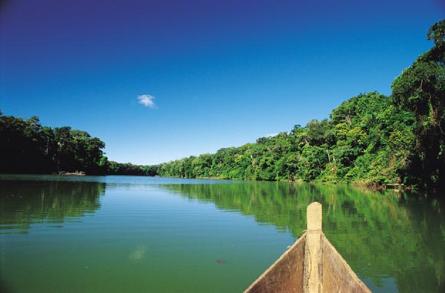 This is a department with many parts of the Amazon jungle, located at the southeast of the country. Was created on December 26 on 1912, formed by the departments of Puno and Cusco, his name comes from the river with the same name, and which Waters covers the capital, Puerto Maldonado.

This department is entirely jungle, has sites with low jungle and High jungle.

The Petro glyph near the Shinkebeni River indicates that the presence of humans is ancient, The Arahuacos came on migrations and from that it derives many ethnic groups.

Some tribes, like the Machiguenga are still living on those territories. The Region known as Madre de Dios was part of the Inca Empire, known as Antisuyo, many Studies said that conquer this region was very difficult for the Incas, because many tribes was against the tyranic govern of the Incas, and fight for their Rights, but the Incas won on majority and organization.

During the Colonial Period, many Spanish expeditions came to the region, but the results were tragic, until 1861 a man called Faustino Maldonado explored the whole territory, and in 1890 Carlos Fermín Fitzcarrald found an isthmus that connects the Ucayali and Madre de Dios Rivers.

After the Rubber and gold rush, in 1915 because of the insistence of the Dominic Missionaries became to evangelized to the tribes, despite they don’t want to accept the civilization. This is not always was a good thing, because the tribes were out of place and depend of the western civilization, however there are still tribes that has no contact what so ever with any kind of civilization.

Madre de Dios Offers many options and a variety of flora and fauna, and also has one of the many National Reserves in the country, like the Tambopata National Reserve, in which the richness of the land is Amazing, and also the National park of Manu, where only can be Studies of anthropological and biological types.

Is one of the zones that contains more biodiversity on the planet, is considered a natural richness because conserved his original ecology and is one of the best examples of Amazon variety in the country.

Is the shelter of 3 different ecosistems: The Eastern slope of the Andes, the Amazonic plane and the pampas ecosistem.

On this Natural Reserve there is a huge variety of species like the sea wolf, the river giant otter, the anaconda, the sachavaca, the jaguar, among others.

At least on this Reserve are 630 bird species, what is ideal to see and not get bored by these cute birds, there are over a 100 types of amphibians, 169 types of mammals, over 200 hundred of fishes, 103 types of reptiles, butterflies and many others.

Is a Protect area, located on the south east of the country, specifically on the departments of Madre de Dios and Cusco, on the Provinces of Manu and Paucartambo, and is divided on 3 sectors: The National park (with a longitude of 1909 8000km) the Reserved Zone (1532 806km) and the transition zone (120 000km), many studies said that this places is where is located the Paititi or lost city of the Incas.

Due to the difficulty of getting in the depths of the territory, the Incas has trouble to conquer the incipient warriors of the tribes. There’s a lot of rest of ancient cultures, like the Paratoari Pyramids, the petro glyphs of Pusharo, a group of images that still are not can be figure out.

Pachacutec and Tupac Inca Yupanqui arrive to these lands and annexed on their benefit, until the arrive of the Spanish, who in a short period found the town of Paucartambo, place where establish encomiendas and where the King itself, Charles the third of Spain order the construction a bridge to make so much easy the transport and communication among the towns. This Valley starts to provide products like Coca leafs, sugar, cotton, wood and others.

To the end of the XIX century, the rubber boom was in his entire rise, people like Carlos Fitzcarrald start to exploit the Manu zone but partially, to the 1920´s the resource was over and the hand work so much cheaper in Asia was gaining field to that extraction.

How was created the Manu National Park

In 1967, with the initiative of Celestino Kalinowski and Ian Grimwood, it was recommended to the Peruvian State the creation of a National Park in Manu. In 1968 declared National forest, and May 29 of 1973 it was created by supreme decree 0644-73-AG, with the purpose of preserved the cultural and national Patrimony in benefit of the upcoming generations.

From January to March is rainy season, but throughout the year it can be raining from all of the sudden, the temperatures varies from 35 to 20 degrees during the night.

How to get to the Manu National Park