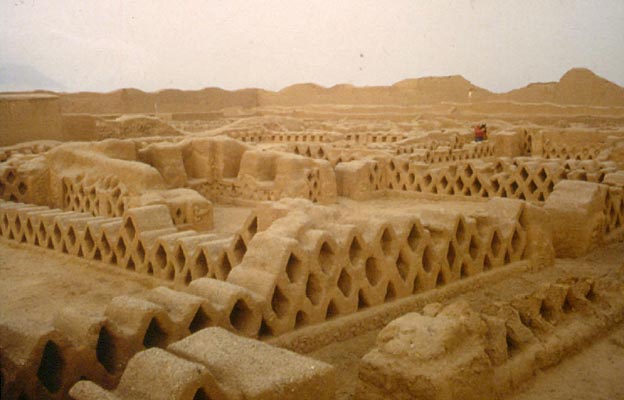 Chan-Chan, The timeless citadel of clay

This enormous archaeological complex is located in front of the sea, half way between the Huanchaco hot springs and the city of Trujillo, which is the capital of the department of Lambayeque, in the north coast of Perú.

The site covers an extension of 20km; the central zone is formed by 10 places with walls, called citadels, and a few structures with a pyramidal shape, and the rest is formed by sidewalks, walls and cemeteries in bad shape.

The heart of Chan-Chan is made by 10 citadels, called that way because of his big volume, looking like little cities with big walls. The way that Chan-Chan was built shows the kind of status that each part of the society was formed, occupying different areas, depending of their economic condition.

Inside of the construction, there are 3 levels: North, Central and south. The first is a Square with little benches, where the people might have sit on it; with an access on the south side, which leads to the stores, in which a very important administrative servant of the city might be lived or work there.

The Central side is where it found many constructions dedicated to the storage of the products that grows near the citadel, and also is where the funerary platform is located, where the principal lord is buried. Most of this platforms were plundered at the arrival of the Spanish conquers in 1532, although this have might start before the Spanish, and beginning with the Inca occupation around 1475 approximately.

The South side is where the people lives, this was a domestic area, with rooms and bedroom community, where the water well is located, bringing water to every person who lived there.

Chan-Chan is on Quingnam language the sun of the shining sun, the name comes from the exposure of the city to the sun, since that part of the country is always sunny, although the rains are constant; the clay citadel was never melted throughout the centuries.

This language as only used by the elite in the territories that belong to the Chimú Empire. Unfortunately this language was extinct at the arrival of the Spanish conquers.

The Chimú Culture used the materials that were available on the region, like sun dried bricks with rocks, all united with clay, wider on the base and narrow on the top. To the built of the floors, they used the same sun dried brick that were broken, along with soil, rocks and other materials.

The use of vegetal material served to made columns, roofs and poles. One of the most fascinating things to observed is the that the walls are decorated in high relief, they used moulds to create fishes, birds and geometric shapes, all with a beautiful and delicate finishing touch.

The Chimú Culture and the myth of Tacaynamo

This culture emerged around the year 900 ad; the capital of their reign was indeed Chan- Chan, the biggest citadel made of clay ever built. The Chimú culture was born from the rests of the Mochica culture, who were in decadence at that time.

They were able to take advantage of the land that lived and create an intensive agriculture and hydraulics works, using the Huanchaques, who was little holes in the ground where the humidity of the ground allow them to grow many products like sweet potato, papaya and cotton.

They also used wells, to get water and water storage to keep the water clean and use to drink or cook, increasing the productivity of the land.

By 1474, the Inca Tupac Inca Yupanqui directed a campaign against the Chimús; incorporate them to the Tahuantinsuyo Empire, taking to Minchancaman, the last Chimú emperor to the city of Cusco, confiscating all the gold and his fortune to make some work of art in the Inca city.

With the arrival of the Spanish conquers, the city of Chan-Chan was plundered and destroy in his majority, due to the myth or legend that on his walls there was a secret treasure made of gold and silver, but that of that were true.

The date of the foundation of the Chimú culture has a mythical story: According to an anonymous myth, Tacaynamo comes from the north on a raft to the Moche Valley, and he was the first governor of Chan-Chan. They were 10 kings of that dynasty. The last governor, Minchancaman was who surrender to the Inca army.

The Nik An Walled Complex

This well conserved construction is the reason that the ancient Peruvians, especially the Chimú was able to create a whole cult to one of the most important force of nature: The Sea.