Peruvian food is an important expression of the country’s culture, just like its ceramics, textiles, music, and literature. The coastal, mountains, and jungle regions of Peru offer an abundant variety of fresh ingredients that satisfied not only home cookers but also the most sophisticated chef.

The culinary history of the Peruvian food dates back to the Inca and pre-Inca with its maize (corn), potatoes, and spices that later was influenced by the arrival of the Spanish colonies, and throughout the years it has incorporated the demands of the different migrations and “mestizajes.” Such groups included Chinese, European, African, and Japanese immigrants.

The primary ingredients found in nearly every Peruvian dish are rice, potatoes, chicken, pork, and lamb. As a major fishing nation, fish is abundant, and prepared with imagination. 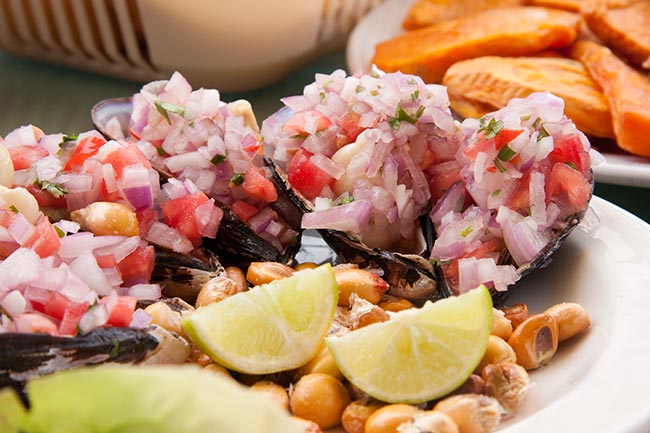 Incorporated into many meals are the different kinds of “aji,” or Peruvian hot pepper, which mainly are: yellow aji pepper, red aji pepper, red rocoto pepper. These peppers are used to add spice or add delightful, less spicy flavor to a range of pasta and dipping sauces.

Chicken, pork, and lamb were introduced to Peru about 500 years ago, when the Spaniards came to America. Other ingredients, like potatoes, were already being grown in the Peruvian Andes and were taken back to Europe by the Spanish. Today, more than 200 varieties of potato can be found in the Lake Titicaca area of Peru. They range in color from purple to blue and from yellow to brown. Sizes and textures vary as well. Some are smalls as nuts; others can be as large as oranges. 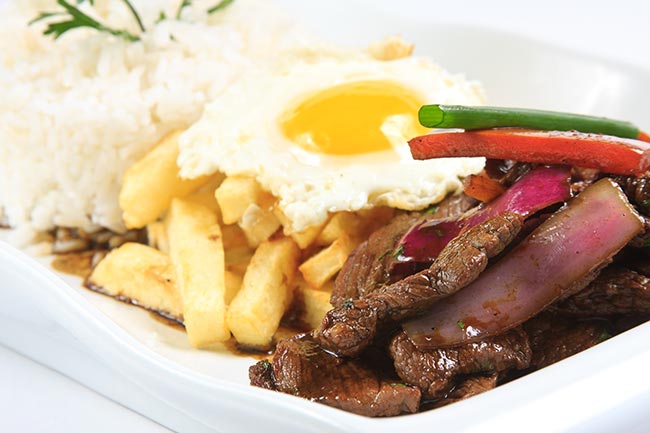 Here are classic dishes and foods from Peru:

Pescado y Mariscos (Fish and Seafood) – Anything with fish is a great bet. Ceviche is the most famous. Peruvians “cook” fine white cod in lemon juice, serve it chunky with onions and spices. In the mountains, you can find “trucha,” the local fresh Andean trout, generally farm raised. 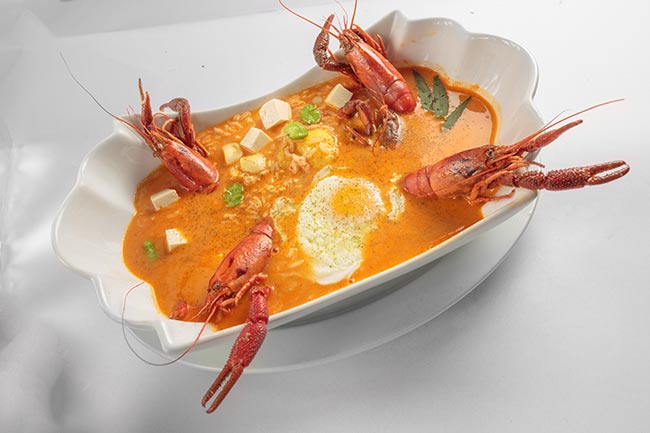 Chifa: This is the term for Chinese restaurants in Peru. From very elegant to simple, all seem to serve excellent food in and around Lima. Peruvians love to celebrate events at the Chifas.

Inca Cola: The color of this soft drink is bright yellow and it smells like bubblegum.

Carapulca: It is made from dried and diced potatoes with pork, steak and rice.

Ceviche: Fish or mixed shrimp with lemon. The seafood is cut into small pieces and then mixed with lemon juice and left to sit for 1hr. Next, it is mixed with onions, celery, cilantro, salt and black pepper. The dish is served cold.

Ocopa: boiled potatoes in a seasoned sauce of cheese and nuts

Pachamanca: This is a typical dish from the Andes. It consists of lamb, pork, meat, potatoes, sweet potatoes, and a tamale. First, one has to heat rocks on the floor using firewood. When they are hot enough, the food is placed inside a sac and buried in the hot rocks. The food has to be repeatedly checked to see when it is done because the temperature is unstable.

Rocoto Relleno: Typical dish with meat, onions, peanuts, milk and eggs, everything baked inside of the delicious rocoto (pepper), with potatoes and cheese.

Roast Cuy: Cuy, or guinea pig, is considered a delicacy, and is traditionally served for very special occasions.

Western culture has made its mark on Peru, and one of the signs of change is the popularity of pizza. But in Peruvian-fashion, they make it their own way in the old-style, wood-burning ovens that have been part of the Peruvian landscape long before pizza was ever heard of here. And just like the diversity and fusion for which Peruvain cuisine in celebrated across Latin America and the globe, chefs from Peru find ways to spice up the topping selection for even a standard pizza recipe menu option.