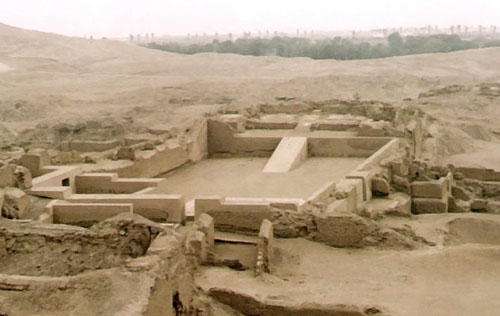 This is an archaeological site located at the right bank of the Lurin River, close to the Pacific ocean, is a complex with many constructions, all of them belong to different periods, from the III century to the arrival of the Spanish conquers.

Pachacámac is important because was one of the most sacred places in ancient times, was an oracle where people from all the Tahuantinsuyo Empire come to worship their principal deity and the creator of the universe, Pachacámac.

The Lima culture was the first people who lived around the complex, in the 100 and 650 year b.d, from that time is the old temple or Urpiwachac, name of the wife of Pachacámac, and also is the Adobitos construction,

By the year 600 ad, a group of people coming from Ayacucho arrive to this site and settle down, starting a new period in the Pachacámac complex, building temples like the painted temple, which is the new construction to the oracle, is a stepped pyramid of 100 mt long and 50 mt wide, in the early times this temple was painted in red, and had figures of fishes, animals, persons and plants, demonstrate the strong influence that the Wari culture has at that time.

In 1938, the Archaeologist Alberto Giesecke found what the only image of Pachacámac, called it from that moment the Pachacámac Idol.

Another structure is the Cemetery, found by Max Uhle in 1903, is a big complex and had one of the best burials with the finest textiles and clothing ever found on this side of the Empire, these bundles belong to the Wari culture, showing that this culture was very careful with his ancestors.

By the year 900 ad, many seigneurs were in clash for this territory, resulting from that is the Ychma; this is was the period of the decadence of the Wari culture. The Ychma culture built at least 16 constructions called Pyramid with ramp, a classical kind of constructions made by this culture; this is called like this because to get access to the pyramid there was a ramp to climb to the top, located at the center of the front of the building.

Three of the 16 pyramids are the most important, since that is where the Curaca, a local governor celebrate feasts and religious ceremonies, making artifacts with luxurious details and also is served of storage, to exchange his products with other town.

The reason why the Ychma built so many Pyramids is that every Curaca when dies, his successor had to built another pyramid, because the pyramid of his father was closed and buried in this built, so the people can access to that structure. This pyramids were built through 30 and 40 years, and depending of the size is that every Curaca had the power and the resources to built a bigger or smaller pyramid.

This is the period when Pachacámac is remodeling their entire construction, and the Incas use it by his religious and politics purposes. According to a Myth, The deity Pachacámac appear in a dream to the future Inca Túpac Yupanqui, and saying to him that he was going to be the creator on earth, and send him to build a new house. The time went by and Túpac Inca Yupanqui on his adulthood visits the Sanctuary,

The temple of the Sun

The constructions more important are the Temple of the Sun, which is the biggest construction and the best preserved in the whole complex. It was built around 1450 ad, as the house of one of the most important deities in the Tahuantinsuyo Empire.

It was made by 5 platforms superimpose, that in group has the shape of a truncate Pyramid, the rest of the construction is made of sun dried brick, united with clay, and on that time it was painted by a scarlet color.

The moon temple or Acllahuasi

This temple was found by Max Uhle, who named it temple of the moon, while Julio C. Tello called it Mamacona. In 1938 Alberto Giesecke restored almost the entire complex, and then Julio C. Tello also restored, and renamed it Acllahuasi, which means temple of the chosen virgins, who were a group of women who served to do domestic activities like spinning and sewing of some of the clothing that the women and men wear and also to exchange by other products.

It was the house of the last Inca governor in Pachacámac, and was the first governor who had contact with the Spanish in 1533. He receives Hernando Pizarro and his soldiers who were in search of gold for the Atahualpa Rescue.

1533 was the year that the Spanish conquers, leading by Francisco pizarro´s brother, Hernando and a group of soldiers was send from Cajamarca to collect the gold that is going to served as part of the Atahualpa rescue, and to do that they need to enter to the Huaca or oracle, but is not going to be an easy task, because the guardians told them that they need to fast one day to be able to enter to that enclosure.

This is a place where the people that came from all around the Empire to worship and see the figure of Pachacámac, and Idol made of wood with many inscriptions and human and animal figures. In here the pilgrims prepared to such an important moment, consult to one of the most strong and powerful deity of all: Pachacámac, the creator of the universe.

Founded in 1965, is one of the most important museums that preserved the natural environment with the new structures of a museum, because on this place keeps the majority of the pieces and artifacts that many Archaeologists found throughout the years.

On his rooms you can see many of the artistic expressions that every culture had on his period of expansion, especially ceramic and textiles, all very carefully protected.

From Tuesday to Monday, from 9am to 5pm.