Taquile is an Island on the preuvian sid of Lake Titicaca, a 45 from the city of Puno. The inhabitants, known as a Taquileños speaks Quechua and Spanish.
In 2005, “Taquile and its Textile Art” were honored by being proclaimed “Masterpieces of the Oral and Intangible Heritage of Humanity” by UNESCO.
Taquileños are known for their handwoven textiles and clothing. kinitting is exclusively for males, starting at the age of eight. And women exclusively make yarn and weave.

Their clotes have a meaning in all of context, the color and the figues of their clotes means if that person is single, married or widower. Most of their clothes have a meaning. The characteristics of their clothes like Chullo (a knitted hat with an earflap,) and the calendar waistband. The calendar waistband has attracted many researchers, because this waistband shows elements of the oral tradition pf the community and their history. Nowadays appeared new designes and images, but the traditional style and thechniqus are still maitained.

The majority of the inhabitants adopted the religion catolica as their own harmonizing their ancient culture with the new Christian culture. The mother earth (Pachamama) one of the principal god which directly controls harvesting, fertility. The population always offer a number of payments each year coca, animals.

The adaptation of the new culture and the new religion, in this way natives accepted it consciously or unconsciously, but they did so in order to continue practicing their own rituals and still believe in their own gods, this procces named by the scientists “syncretism”. 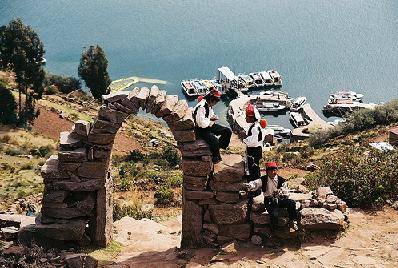