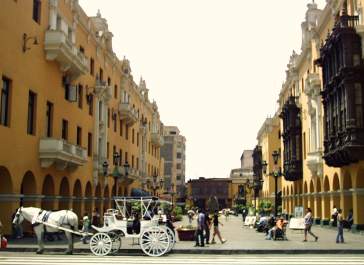 1535, Few Spanish conquers arrive to a dry but abundant territory known as Lima, name that comes from the deformation of the word Ràmac, which means talker and also is the name of the main river that cross trough that place.

2012, almost 480 years later, Lima is one of the most exciting and popular cities of South America and the world, with his colonial architecture, his amazing street food, Lima is a well recommended city for your enjoyment.

The name: The three times crowned city, and the city of the kings comes in honor to the king at that time, Charles the first of Spain, and V of Germany and his mother, the queen Juana, known as La Loca ( the crazy one).

Before the Spanish, the ones who lived in this land were many natives that come from the Chillon, Lurin and Ràmac Valley, the three most important valleys of the region. This place was very rich in products and has one of the best weather in the entire territory known as Tahuantinsuyo.

The Leader who rules this place was Taulichusco, a powerful Curaca who has on his hands the destiny of many people, he control many places, including a very important pilgrimage place, Pachacamac, which becomes one of the most sacred places to the natives that live at that time.

In 1535, on January 18th, Francisco Pizarro arrives to the city in search of the capital of his govern, and found that the Ràmac Valley was the perfect place to settle down and became his city.

The house of Francisco Pizarro was built over the Taulichusco’s house, the actual Govern Palace (Palacio de Gobierno), where nowadays the President of the Peruvian Republican lives.

The Viceroyalty of Perù was the main capital of all the territories that Spanish have conquered, during 300 years, the Capital Lima enjoyed of a very important fame, had the best constructions, the best fabrics and also one of the best places to live.

The republican period is also very important, since that in 1821; an Argentinean General called Jos’ de San Martìn comes to declare the viceroyalty of Perù free of the cruel and unfair domain of Spain, becoming an Independent and equal Nation, The Nation of Perù.

Nowadays, Lima still conserved many of his colonial and republican constructions, declared in 1988 by the UNESCO as world patrimony of the humankind.

Activities to do in Lima

If you’re looking for some exciting things to do while you’re in the city, we recommend you many things that you can try:

Visiting the Main Square of the city is an experience that you cant forget, with the presidential palace, the main Cathedral, and the churches that surrounds the Historic Center of the City is an obligated trip.

Another thing that you can do is visit the taverns that are located in the center of the city, with over 100 years; they served the best food like anticuchos (beef on a stick), cau cau (Spicy stew with potato and peas) and try the best pisco sour or a cold beer in the company of your love ones.

Visit one of the districts that evocates another times, a simpler and better times, Barranco and his Puente de los suspiros, a beautiful bridge that leads yoy to the Church of Barranco, and leads you also to the seafront, and maybe wet your feet and feel the breeze of the wind and the smell of the salt in the air.

Miraflores is one of the best districts that you can visit, with his cleans avenues and his shop stores, his cafes in the open air, and one of the most exciting things is doing some paragliding in the Miraflores cliff.

Outside of Metropolitan Lima, there are a few places that you must visit: The citadel of Pachacamac, one of the main pilgrimage places and one of the most important cults in the Inca Times. With his clay walls and his breathtaking structures, is a destination that you can’t miss.

The Saint Cristobal Hill is also one of the most picturesque places that you can visit, with his cross on the top of the hill, prevent according to several myths and legends, the invasion of Manco Inca to the Spanish soldiers. There’s a bus that can take you to the top, and also on the get back you can see the smallest church in the world in one of the most traditional neighborhood, Ràmac, ancient place where the natives and the slaves used to live away from the Spanish city of Lima in the early 1500s.

Lima has one of the most traditional dishes in the entire region, the mixed of cultures (Chinese, African, Japanese and native) made a unique taste and flavor that you must try and see. From the street food, with the Anticuchos, stuffed potatoes with chili, and many stews like Chanfainita (made with potatoes and cow beef) and the famous Chinese food called Chifa, a variation of the word Chifan, which means let’s eat!. A typical dish of African influence is the cau cau, which includes rice, potatoes chopped in small pieces, served with the cow stomach, so soft and tender is a recognized dish among many others.

The causa Lime, a mash potatoes mixed with ajà, lemons and olive oil, stuffed with chicken or tuna, or even vegetables, is a traditional dish that you can share with a national drink made of chamomile, Inca Kola, a yellow beverage with so much flavor served very cold.

From the early arrive of the Spanish, the sugar was the main ingredient in every part of the conquered territories, and had a big influence by the moors, bringing their own types of deserts made with marzipan, was a huge success among the Spanish.

The called Picarones, similar to a donut but only in the shape, is the desert by excellence, made with squash, flour and sweet potatoes (camote) is truly an exquisite thing to try, dip in some kind of syrup made with honey and brown sugar, is the perfect combination of these two products.

The Mazamorra morada, of also Arabic influence, made with purple corn, chuìo (dried potato in the sun) served with pineapple, peach and raisins, is a tasty desert, sometimes mixed with pudding rice (Arroz con leche) is one of the perfect marriage in the world of the sweets.

The suspiros a la Limena, the most representative deserts of all, is our national desert, made with egg whites, sugar and another Arabic product, the manjar blanco, made with sugar and milk, cook slow until got their brown and distinctive color, is a very tasty desert.