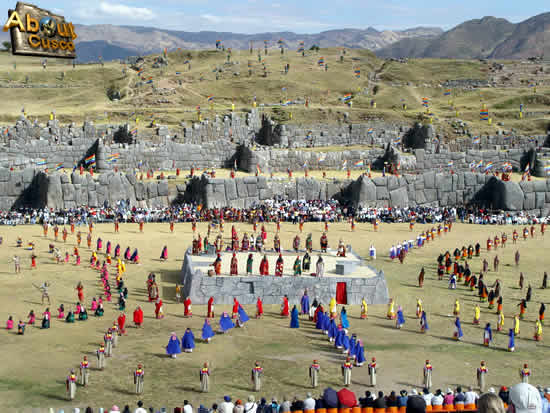 Inti Raymi, the celebration of the Sun

Celebrating the rise of the sun is one of the most ancient rituals in this territory and all around the world, since the dawn of humanity, people has had a fascinating interest in the sun, many empires have been built around this great star.

Perú is not the exception, with their principal god; the Incas have one particular celebration to honor the sun, the Inti Raymi festival is celebrated on June 24th of every year

According to many studies, the IntiRaymi`s celebration has many connotations, one of them is to honor their main deity, since this god was the creator of the universe and is the father of the firsts Incas that ever exist: Manco Capac and Mama Ocllo.

Another reason to celebrate this feast is interact with the people who lived and worshiped the sun; however, people can see the spectacle from a long distance, since the ceremony itself was only dedicated to the most important and powerful leaders and members of the Inca nation.

Not every Inti Raymi was celebrated in the Saqsayhuaman fortress, this was celebrate according to the place where the Inca was located, that is the case of Huayna Capac, who celebrate this in Cuenca (Ecuador) where he was born.

The celebration of the Inti Raymi lasted almost two months: May and June, when the winter solstice occurred and also the beginning of the harvest time in the Inca`s territories (Tahuantinsuyo).

When the Spanish conquers arrived to the Tahuantinsuyo Empire, they saw that the Inti Raymi had a coincidental relation with the Corpus Christi, one of the most important festivities in the Christian world.

But the Inti Raymi festival was forbidden by the Spanish, since this festival did not let the natives embrace the Catholic religion, and that’s why they abolished all kind of festivities that made reference to the Inti Raymi.

That is why the Corpus Christi took importance, because in this catholic festival, the natives can introduce many of their rituals without the Spanish knowingfor whom they were dancing and chanting.

The melting-pot of a catholic celebration and a native one, bring as a result of the coexistence between the Spanish and the natives. Nowadays the celebration of the Inti Raymi is purely artistic so the tourist, foreign and local enjoy one of the most sacred and important festivals in the Tahuantinsuyo Empire.