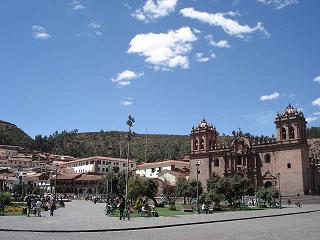 The city of CUSCO capital of the Inca Empire, nominated by the UNESCO as a Cultural Heritage of Humanity, because of its magnificent architecture and also cultural richness. CUSCO means in quechua “navel of the world”, because for the Incas this site represents the center of all: life, culture, military power and economy. Located at the eastern mountains of the Andes, in Huatanay River basin, a tributary of the Vilcanota.

Founded in 23, March 1534 by Francisco Pizarro and established the main square as the location that still maintains the modern city and it was also the main square during the Inca and was surrounded by the palaces of rulers who were the Incas. In the north-facing sun began building the cathedral. Pizarro gave the city the name of Cuzco, Noble and Grande City.

The weather in CUSCO is generally dry and mild. It has two distinct seasons: a dry season from April to October and a rainy season from November to March.

The main economic activity in the city of CUSCO is agriculture, especially corn and native tubers. The local industry is related to mining activities and food and beverages, such as beer, sodas, coffee, chocolates, and more. However, the relevant economic activity of its inhabitants is tourism reception, counting increasingly better infrastructure and services.

Recently THE CITY OF CUSCO was chose as THE BEST CITY OF America 2012, in the World’s Best Awards in the magazine TRAVEL + LEISURE, which takes the opinion of their readers. CUSCO obtained the first award in the category of Mexico, Central and South America.

To know more about this wonderful city has many circuits which can be made walking, most of tourists are worried to meet Machu Picchu, but there are some places that can make you love it.