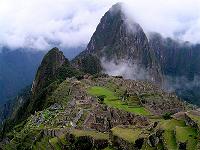 The Incas, being a Heliocentric culture, the one that is in charge of the adoration and ritualization of the SUN in the practices of their daily life, , it was a population that always looked at the sky, looking for any kind of message or a sign that their most important God could give them.
But none of this is possible if you don’t have an essential element to get to this task: The mountains, those silent witnesses that through centuries have seen the boom and the fall of many civilizations, and it is in the mountains were everything emerges everything begins; the mountains are de real foci of life, controlling every aspect of fertility that inhabit it.

Apart of the hills, the places with considerable height also play an important role in the Incas rituals; it is the case of the Intihuatana, the one that had the function to connect the underworld with the celestial done, through a series of ceremonials that always involved the observation of the sky, in a specific moment and under specific cannons.

The Intihuatana is called ( The one that ties the Sun) it is a way of saying that it had the control over the biggest star of our Milky way, making that for a moment the Sun would be trapped in that construction, auguring a lot of things as the harvest, the death of an important character , between other things.
Why was the observation of the sky important? First the vastness of the world and after of the universe, it is something that has troubled us since our ancestors in Africa, it was useful for the navigators who followed its rhumb they could know where they were and in that way keep on with their trip.
Then the sky, the sun and the stars were a fundamental parte of the life of the human beings for more than 2 centuries, being the crowning moment in the occidental civilization, the so called the star of Belen, that star that guided the Wise men in the search of whom later on would be known as Jesus Christ.
But talking about the general local area, The Incas had these stars not only concerning to their space and time, but also as part of their everyday Pantheon of worship. The sky at night became a canvas, where the stars and the moon formed the perfect painting for the observation and the development of predictions and prophesies that these stars dictated.

During the day the Sun was whom directed almost all the aspects of the Incas life, since the sun raised it was a special moment as it was the beginning of a new birth, and one more possibility of doing things in the right way, instead the sunset was taken as the moment were there was a fight between good and bad, this battle took place every day, being an epic moment in the life of the Incas.

The Incas were aware that the world where they lived had a beginning in the cosmic order, order that began with a nebulous chaos to make way for a celestial order that was formed by the constellations and all the things that the sky shows us.

The Wawawara Hawira name given to the Milky Way, determined in a precise and clear way which would be the movement of the stars the Sun and the Moon, understanding this as a division of the sky, winter and summer following always the duality that characterized the Incas.

With the observation of the celestial bodies the calendar of the Andean agriculture was born, one of the most important in this side of the world, the one that determined a series of activities like the harvest the sowing and the adequate moment to present the offerings to begin with the agricultural activities.

The case of the coastal calendar was different because the climatic conditions required a different type of rituals and practices that were linked with the cosmos, beginning with the cult to the rain (Illapa) and the thunder enablers of good harvest that would guarantee the success between whom predicted these events.
Thus the observation of the stars was more than just a look into the sky, it was a ritual but not all of them were aware of it, since the precision with which they treated the heavenly bodies was with great care, because this observation categorically determined all the season of harvest and sows, being careful with the most small detail, ensuring a good production onwards.