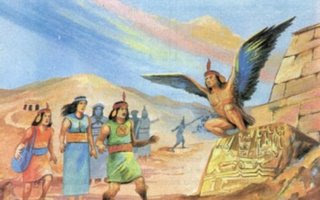 In the beginning of the time, many fabulous people lived in the world, Gods, semi gods and founders of the most important civilizations, like Rome, Greece, China and many others.

But one has a unique and significance beginning: The Beginning of the Inca Empire, who has a fantastic legend about that. It all starts when the Spanish Chronicler, Juan de Betanzos, who lived in Cusco around 1551, got married with a princess that belongs to the Inca elite, he use to speak Quechua, the official language of the Empire, and heard about that legend:

Over the Pacaritambo Mountain, emerged the four Ayas brothers, after a major flood that destroyed the earth. All of them came out from the Tamputoco Hill, with his wives, who were also his sisters: Ayar Manco with Mama Ocllo, Ayar Cachi and Mama Cora, Ayar Uchu and Mama Rahua, and finally Ayar Auca and his wife Mama Huaco.

From the 4 brothers, Ayar Cachi was the strongest of all, He had a slingshot that threw stones that reached the sky, and made the sky rain and creating thunders. The 3 left brothers were jealous of Ayar Cachi, and decided to lock him on a Pacarina, which is one of the most sacred places.

They said to his brother that he must enter to a cave to search for food and other things. He was betrayed by his own brothers, putting a big stone on the entrance of the cave. That made Ayar Cachi so mad, that he yelled so loud that he open the mountains and shake the sky.

The remaining brothers keep his path, arriving to a Mountain called Huanacaure, where they found a stone Idol who has the same name as the hill, the 3 brothers with his wives enter to the worship place with a lot of fear, but one of them, Ayar Uchu, challenge the Idol, and for that reason he turn into a stone, but before that he told his brothers that continue their path and celebrate something called Huarachico (a festivity in honor to adulthood).

Ayar Auca, in search of a place to live with his brother, he grow wings and flew over a place known as La Pampa Del Sol (the Sun settlement), he land on this place and turn into a stone. The only brother that left was Ayar Manco who arrived to the city of Cusco, where he found the right place to settle down after he sunk the golden stick that was deliver by His father and god, Inti ( the Sun), founding the Inca Empire, Tahuantinsuyo.

The interpretation of this legend is that the war and the battle for the strongest is always an eternal constant in all humankind. In the case of the Incas, The one who remain intact, receive the huge responsibility of leading the foundation of their Empire.