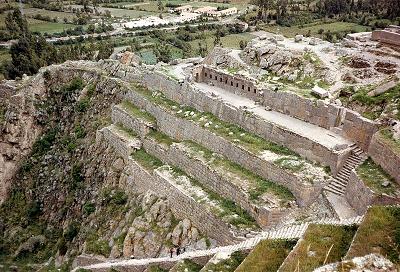 Ollantaytambo Was a site with many archaeological structures like astronomic observatories, administrate, agricultural and urban. Is a city with the remain of his Inca legacy, since this still keeps some of the constructions that were built by the Incas, and the natives are still using it like 400 years ago.

Is dry during the months of April and December and rainy on the months of January and March. His temperature oscillates between the 11 and 15 degrees, reaching to the maximum 18 and 23 degrees.

Ollantaytambo comes from the Aymara voice Ullantawi, which means watchtower or observatory. Many years later Wiracocha Inca conquered Ollantaytambo, and send to build a Tambo or deposit where they keep all his food and products grow in the Andenes (Platform’s), therefore the name Ollantaytambo, which means The Tambo of Ollantay, who was a soldier, who comes to life on a theater play that was made around 1780.

The plot was that Ollanta, an Inca General who was in love of Cusi Coyllur, Pachacutec´s daughter. He was one of the bravest soldiers that the Inca Empire has, but he leave the city given that Cusi Coyllur was not from his same social condition.

He starts a rebellion against the Incas, which last for almost a decade. He was captured by Calcuchimac, a General from the Pachacutec Empire, and when went to Pachacutec, he explains his situation, and the Inca forgives him and accept that he and Cusi Coyllur get married.

Was a deity, like Wiracocha, a supernatural being, dress as an astronomic priest, with a stick of 4 parts, which represents the fourth cardinal points.

He was draw on the side of the Pinkuylluna Mountain; a very important place where the priest could observe the changes of the constellations and the movements of the Sun, the Moon and Venus.

Tunupa means creature from the nature, which protects the entire universe, and is located at the top of a tree, that represents nature in all his pure state.

¿When is the best time to go?

The whole year is a very good time to visit, but if you like you can visit specially the months of April an October. You got to check your travel, and be able to coordinate your vacation travel, so you can’t be uncomfortable with the weather and the temperature.

The peruvian province of Urubamba located in the Department of Cusco in 2.800 meters on the level of the sea, crossed by the Vilcanota River, which upon entering this area takes its name from Urubamba. The Incas chose this place because the land was very fertile for agriculture and established their principal monuments: Urubamba, Ollantaytambo, Chinchero, Huayllabamba, Machu Picchu, Marás y Yucay. This place is known as a “Valley Sacred” because of the fertile land rivers and beautiful landscape which make this valley one of the most amazing places of the earth. The name of this place means “a place to look down” Ollantaytambo is not only a monument is a legacy from Incas, which preserves religion, tradition and culture. In the entire river, it can see towns founded by the Spanish, seems stopped on the time, moreover many precolombina ruins, aqueducts systems and palaces.

This is one of the major archeological monuments in Peru, built on an area of 600 hectares and is one of the few areas that preserve the real form of the oldest urban planification.

During the Inca Empire, this place was the major state of the emperor Pachacutec, who built this place and established a ceremonial center. At the time of the Spanish conquest this place was used as a fortification and served to Inca Yupanqui who was a leader of the indigenous resistance.

Ollantaytambo is divided by de river Patacancha; this shows the duality culture of the Inca Empire. The two places are:

Qosqo Ayllu (East): this part of the place has an octagonal form, and it was used as a town.

Llaqta Araqama Ayllu (West): On the other hand this place was used as a ceremonial temple and where is the Mañay Racay square known as Aracma Aylliu Besides of the name was mentioned, this place also have a huge Pyramid named La Roca del Viejo (The stone of the old man), pre Hispanic quarries and a wonderful group of ceremonial centers.

The main places to visit in this area is the Town of Pisaq founded by the viceroy Toledo in 1572, where smart artisans even today can create products with an excellent quality. Also it would be interesting to visit the city of Calca located in a plain around the Andes, has a valley irrigated with the water of the snowy mountain named Piturisay.

Also Ollantaytambo is known in other ways by the drama wrote in the XVIth century and represented in a theater in 1780. The drama shows the conflict between the love of General Ollanta and the daughter of the Inca Pachacutec “Cusy Coyllor”. Ollanta was one of the distinguished general of Inca Empire, because of him was brave and very smart, but he had to left the city because his love was forbidden. Cusy Coyllor belongs to another social class and in that time this kind of love was forbidden by the rules. So Ollanta decided to begin a fight against to the empire army, causing a war that lasted for one year, at the end our hero was betrayed an captured by General Rumiñahui, who took him to Cusco at the feet of the Inca Pachacutec, who heard the story of Ollanta and decide to give her daughter.

This is little piece of Ollantaytambo, a place with awesome monuments, incredible landscapes, a culture involved in mystery, magic and love. To learn more about Ollantaytambo, historians recommend and invite us to discover the mysteries around this place.