How Big is Machu Picchu 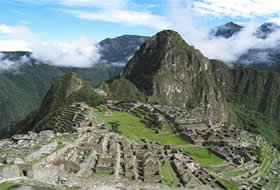 Can you imagine how big is Machu Picchu? The sanctuary is located in the district of Machu Picchu, in the province of Urubamba in the department of Cusco. It spans one of the most impressive archaeological sites in the world. It has an area of 32,592 hectares.

The built area in Machu Picchu includes 172 campuses; it has 530 meters long by 200 wide. There are two areas in the complex; both zones are separated by a wall, a moat and a staircase, elements that run parallel to the slope east of the mountain.

Which consists of sets of agricultural terraces, this is at the south. The farming terraces look like great steps built on the hillside. Formed by a stone wall and a filling material of different layers to facilitate drainage and preventing water and crumble structure. This type of construction allowed cultivating on them until the first decade of the twentieth century. Other platforms are smaller width at the bottom of Machu Picchu, around the entire city. Five large buildings are located on the platforms east of the Inca road reaching Machu Picchu from the south. They were used as warehouses or Colcas. To the west of the road are two large sets of platforms: a concentric semicircular cutting and other straight. 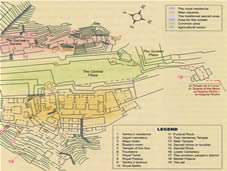 This is where the occupants lived and where there were major civic and religious activities. The city is separated from the agricultural area by a wall 400 meters long. Parallel to the wall is a moat used as the main draw of the city. At the top of the wall is the door of Machu Picchu which had an internal locking mechanism. The scheme proposed by Chavez Ballon in 1961 is still valid and divide the are in a sector called hanan (high) and another hurin (low), the physical axis of that division is an elongated square, built on terraces on different levels according to the decline of mountain. The second most important axis consists of two elements: a wide, long staircase that serves as the “main street” and a developed set of sources of water that runs parallel to it. At the intersection of the two axes are located the residence of the Inca temple-observatory tower and the first and most important water sources. 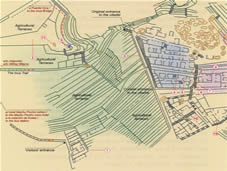 The main building is known as the Tower, it is built on a large rock below which there is a small cave that was completely lined with fine masonry. It was supposedly a mausoleum and rested in large niches mummies. It is accessed by a double jamb cover. The tower was used for ceremonies related to the June solstice. One of the windows shows signs of having been encrusted ornaments destroying part of its structure. In addition there are traces of a large fire at the site.

This is the finest, largest and best distributed of Machu Picchu. Its gateway faces the primary source of the city. It includes two large rooms of monolithic lintels and well carved stone walls. The set includes a corral for camelids and a private terrace overlooking the east side of the city.

It is said that the place was used for various rituals. It includes two of the best buildings of Machu Picchu, which consist of large carved rocks: The Temple of Three Windows and the Main Temple which is believed to be the main ceremonial precinct of the city. Attached to this is the “priest’s house” or “House of ornaments.” There is evidence suggesting that the overall package was not finished

It is a hill whose flanks were turned into terraces, taking the form of a large polygon based pyramid. It has two long ladders to access, to the north and south. Atop the is located the stone Intihuatana, this is one of the most studied objects from Machu Picchu, which has been implicated in a number of places considered sacred from which sets clear alignments and astronomical events surrounding mountains.

It’s a flat-faced stone placed on a broad pedestal. It is a milestone that marks the northern end of the city and is the starting point of the path to Huayna Picchu.

Architectural set dominated by three large and interconnected kanchas. Their front faces the main square of Machu Picchu. This includes housing and workshops.

Group of mortars or acllahuasi

The largest group of the cities, has a famous well carved stone room in which floor are two rocky outcrops carved circular shaped mortars for grinding grains supposedly. Some believe that they were filled with water and they were reflected in the stars. The set includes evidence of ritual use, there are altars.

It is a set formed by a grand staircase that runs alongside a system of 16 artificial water falls. The water comes from a spring in the heights of Cerro Machu Picchu that was channeled during the Empire.