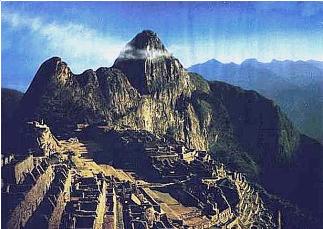 In a way, given its strategic location, it could have been a military, a defense position to control potential rebellions. It is also believed that it was the ideal resting place of the Inca, the largest shrine dedicated to Pachacutec, who saved Cuzco from the invasion Chanca. And even could have been a graveyard of women, real virgin, dedicated to deities and the service of the Incas.

Machu Picchu may have been too Vitcos fortress, guarded by Vilcabamba, due to similarities between Quechua words Vitcus and Picchu. Other historians believe that Machu Picchu may have been Tamputoco, the legendary birthplace of the Inca elite. Moreover, given the number of graves of women found it was thought that that it was a cemetery of women who used to hide to perpetuate the old traditions and rituals.

Generally, all historians agree when said that Machu Picchu was used as housing for the Inca aristocracy after the Spanish conquest of in 1532. It was an important agricultural center, away from the main roads. Still, Machu Picchu remains the great unknown, reason why was not destroyed by the ancient conquerors.

After Tupac Amaru, the last rebel Inca, was captured, Machu Picchu was abandoned as there was no reason to stay there. But for now, there is nothing certain about its purposes. No sixteenth century chroniclers mention that. Since it was unveiled, Machu Picchu has remained a mysterious archaeological monument.

It is said that the construction of the citadel was actually during the height of the Inca Wiraqocha, eighth king of Cusco.

In fact, the Inca ordered the construction of a hill in the beautiful palace for housing, temples to the sun god and the moon goddess and numerous houses to host its beautiful women, all very similar to those that existed in Cuzco.

Machupicchu had a specific role: to be the favorite place of the Inca Wiraqocha for rest and recreation. An accessory role was as an astronomical observatory.

It reached its maximum splendor during the reign of Wiraqocha Inca, who governed Cuzco like a kind king, gentle and loved by his subjects. Its decline started when Wiraqocha flees cowardly, leaving Cusco against the military invasion of the Chanka state, led by an ambitious king named Uscovilca, and takes refuge in the citadel making it his permanent resident.

Kusi, one of the minor children of Wiraqocha, without hearing the advice of his father, who asked to submit humbly to the Chankas, faces the invading army and defeats him in paths and bloody battles. Since then Kusi Yupanqui, virtually assumed power creates its own army and the Royal Council of Wiraqocha undergoes him.

The place where Wiraqocha fled before the attack Chanka was at that time called Llaki Qawana (“The look of sadness”). The so called Kaqya Qawana Cuzco. (“Place where you look the ray”). Only later was called Machu Picchu.

After the victory over the Chanka, young Kusi humbly offered the spoils of war to his father Wiraqocha who contemptuously replied that his son and successor Urko, a hopeless drunk and sexual pervert, should receive the loot. Resented by the rudeness that his father had done, Kusi returned to Cuzco to consolidate its power and focus on reconstruction and beautification of the city. But secrecy also planned the death of his main rival: his brother Urko. Fact that was held shortly afterwards.

Wiraqocha deeply moved and saddened by the murder of Urko, his dearest son, decided to stay forever in his citadel and not see his young and victorious son Kusi Yupanqui, whom he hated in the depths of his being.

Only a clever strategy of the Royal Council, brought out of his refuge Wiraqocha to visit Cuzco: They told him that his son Kusi “invited” to personally observe the transformation that had taken place in its main city. Once in Cuzco, Wiraqocha still surprised by the victory of his son before the Chankas, resigned since the death of his favorite son and successor Urko and admired by the power achieved by his despised son, seeing the great transformation of the city Cuzco, named his son Kusi, PACHACUTEC “the transformer of the world”.

However, Kusi would not wait longer to become king and quickly pulled the tassel of her father’s head and placed himself, becoming recognized since then as absolute king, adopting the nickname that his father had given him: PACHAKUTEQ. Cruelly humiliated his father, making him kneel before him and apologize for his rudeness. Then punished him ordering drink plenty of chicha (corn beer) unclean. Finally banished him to live until his death in his “recreation center”, now become his home of sadness and helplessness.

The Inca Pachacutec thus knew the true personality of despotic king, cruel and vindictive. After having had ten years of loneliness and humiliation, Wiraqocha died. His son Pachacutec ordered in contempt for his father, the total depopulation and abandonment of the citadel called Llaki Qawana and is now known as Machu Picchu.

Thus began the deterioration of buildings of Machu Picchu, gradually being covered by dense vegetation. Just stay in the memory of some of its people, those who were passing quietly to their descendants as a distant and sad reality.

In 1900 a local farmer named Agustin Lizarraga, who lived near the area, dared to visit the old and ancient ruins being deeply impressed by the grandeur of its buildings. But no one dared to make known his discovery for ten years, for fear of being considered crazy or be punished for revealing a state secret.

Finally, in 1911, the American explorer Hiram Bingham, a professor at Yale University, was told by the peasant Lizarraga of the existence of the Inca citadel, lost in a mountain called Machu Picchu and guided to the site. His surprise was immense and immediately claimed the discovery and proudly announced its headquarters.