The most outstanding news of Machu Picchu are here, so you can find out whats new and the latest discovers, celebrations and all related to the Sanctuary.

Machu Picchu is celebrate his 29 years of considered World Patrimony

The Organization of the United Nations for the education, science and culture (UNESCO>) declared Machu Picchu as Natural, cultural and world Patrimony, and the city of Cusco as Cultural patrimony of the humankind.

The Minister of Culture is keeping the task of maintain Machu Picchu and the City of Cusco like one of our most iconic and most important places to show us how huge is the impact to the foreign has in their minds, and how important is Machu Picchu to our own identity.

The Director of the cultural region of Cusco, David Ugarte Vega Centeno, said that the places called World Patrimony belong to every Peruvian that lives in the country and lives in other countries, is our responsibility that Machu Picchu and other Historic Sanctuaries is saved from the vandals and their destruction by other tourist and even ourselves.

In this scenario, Machu Picchu is keeping the line of multiply his visits and his cultural, social and economic diversity. No one cant denied that Machu Picchu is quickly become a very important place to visit and feel that the time is not passing by in vane, many structures needs to be conserve more than others, due to his precocity. That’s why our own task that Machu Picchu maintain clean is and free of any kind of bad tourists. 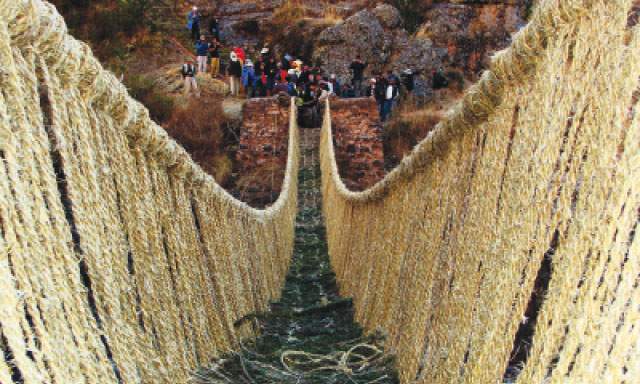 The Qeschawaka Bridge, That connects Qehue with Canas, tow of the most important province in the Cusco department, is now an issue for his conservation and protection. The bridge cross the Apurimac River, an important river to the Inca people many centuries ago, his name comes from the words Qeswa, which means twisted cord, and Chaka which means bridge.

The material used for this bridge is the Ichu, a kind of grass that grow around the highland, this material is dried to the sun and then is used to fabricate some kind of rope to the mentioned bridge.

Every year many natives of the Cusco Communities like Chaupibanda, Qehue and Canas gather around the bridge and starts an ancestral ritual called Minka, that consist in doing some community works that is going to be useful to every person who lives around the river.

These kinds of material used by the locals were more effective than the stone or other kind of materials, because is more easy rebuilt the bridge, and also avoid disasters such as earthquakes and other calamities.

The Minka last 4 days and the main event is the reconstruction of the bridge, which gathers the people who live in the near provinces, after that is celebrate with dances and drinks to the people who participate of this ancient ritual.

This renovation of the bridge is considered since the year 2009 like a National Heritage, this is an example of the legacy that the Incas left to his generations, and also mentioned the effective and simple technology of the Tahuantinsuyo people.
Why is it important maintaining the tradition alive?

One city without his past is a dead city; with no memory a city could not see what his legacy is, and what is worse, they can’t see what his future is. The tradition, the rituals is a huge part of who we are and recreate our past is keep in touch with our ancestors and see where are from.

Recreating the construction of the bridge is important because keeps the people together and the relationships between them are closer with the pass of the time. Women, men and children works for their community, built the bridge many times as they need it.

The Minka is practice from Inca times, is one of the precepts in the moral and ethics that the Incas had, their phrases don’t be a thief, don’t be a liar, don’t be lazy is one of the codes more useful in the Andes. The Incas were a culture with so much support between each other, no one is selfish, and everybody contributes to their improvement of each citizen.

Perú once again is showing how wonderful and amazing country is; winning 2 of the 3 categories that is competing to, best culinary destination and Best Green destination (Machu Picchu).

The World Travel Awards is one of the most recognized institutions of promote tourism and be part of the culture that each country has to offer, being Perú the first country who took that award in what food and gastronomy concerns.

The other award was that Machu Picchu is considered as the best green destination, this shows one more time that Perú has to be an obligated destination to every person, the quality of the Sanctuary is unmistakable.

This event that celebrates this year in New Delhi, India, rewards only the best places in the entire world, competing with France, Italy and many others.

Machu Picchu as a green destination was competing with countries like Brazil, Costa Rica, Dominican Republic and Ecuador, rising from all this destinations, this is an award that all the Peruvians must celebrate.

Part of the success that Perú has won two prizes is what the MINCETUR is doing for the last 4 years and also PROMPERÚ, which an institution in charge of promotes the tourism, local and foreign.

For 19 years, The World Travel Awards is considering several times to Perú as a best culinary destination and Machu Picchu for best green destination, a feeling so gratifying that every Peruvian got to visit and try our delicious food and visit our most precious gift from the Incas.

The National Service of meteorology and hydrology of Perú (Senamhi) said that the climatic changes that occur in the world, is affecting to the ancient Sanctuary and the Inca citadel and other archaeological sites.

This is important because the species that live there, like animals and plants, are severely affected by this massive change, not letting the animals feed on the fresh grass and other product that grows near the Sanctuary.

According to the director of Senamhi, Ada Castillo, the climatic changes has monitor from the Salcantay glacier, because the melting of the glaciers confirmed that the water reservoirs are decreasing, and that’s something the authorities have to keep in mind, because is an issue that matters to all as part of our National cultural heritage.

She also says that it’s been recovered animal species like el Oso de anteojos and Gallito de las rocas, two of the species that is on ways of extinction.

The Machu Picchu Master plan will be updated on 2013

The regional President of Cuzco, Jorge Acurio Tito, mentioned that this master plan will be ready for the document elaboration within 6 or 7 months, and the main purpose is look for the constructions of our modern wonder of the world.

With this plan, the manager who is in charge said that one of the things that will be determinate is the capacity of persons who visit the Sanctuary, that is around 2500 tourist per day.

However, in 2012 the UNESCO, with its Latin America headquarters, said that Machu Picchu could have been in the possibility of became part of the list of Humanity heritage on risk, because in May of 2012, several agents visited the Sanctuary and said that Machu Picchu need immediately the presence of specialist that search for an evaluation of the risk that implies the construction of a highway that leads to the Sanctuary, which is unthinkable because it’s a Protected area by many institutions.

The most important thing that UNESCO wants is that Machu Picchu will not turn into a second city, with population, markets and the rest of characteristics that a city has, like Aguas calientes or Machu Picchu town; with that observation, the world institution recommend that take those advices to put on practice soon as possible.