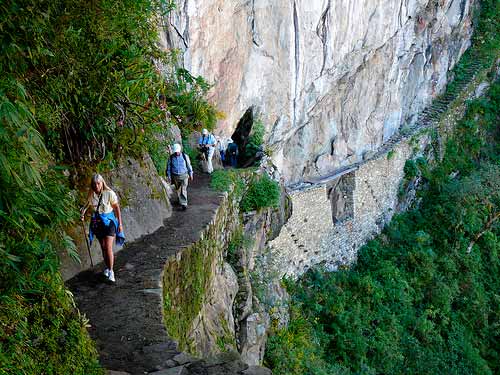 THE INKA TRAIL is the most famous trekking route in Peru and maybe in the Americas. Every year thousands of hikers visit this route to experience the thrill of walking the incredible route made by the Incas.

The Inca Trail, or in Quechua Capac Ñan, was a network of roads that extended through the entire Empire over an approximate distance of 30,000 km. All the roads eventually led to the Imperial Capital Cusco.

Prior to the rise of the Inca Empire, smaller civilizations like the Wari and Tiahuanaco also used these footpaths but only over a limited area. When the Incas rose to power in the early 1400s, the routes were improved and expanded. The roads were used to invade other civilizations and to maintain control over the entire empire.

The Chasqui were runners that carried messages and objects from one part of the empire to another. Some people say that the chasqui would run as fast as possible to the next post and so on until he reach his destination. Some chroniclers say that delivering a message from Quito to Cusco took less than five days.

Stretching across a very hostile geography, the Capac Ñan linked the ocean with the mountains of the Andes and the jungle. In some places there were tunnels, stepped paths to go over steep mountains, and bridges to cross rivers. These routes permitted messengers to arrive to any city within the empire.

Nowadays the Inca Trail, which is also part of the Machu Picchu Historical Sanctuary, is visited by many tourists and hikers. Travelers will cross high altitude passes to finish directly at the entrance of Machu Picchu.

To hike this trail, people may choose from two options according to their abilities. Most people choose the 2 day version, which starts only 14km away from Machu Picchu. The path rises to an elevation of 2.750 on an easy climb to Huiñay Huayna and then down to Machu Picchu.

Most people prefer to spend the night and see the ruins of Huinay Huayna before arriving to Machu Picchu for sunrise on the second day.

Another way is to start in the Sacred Valley at “Kilometro 88.” The trail crosses the bridge of Kusicancha, and then continues to the left into a eucalyptus grove. This trip is not for people with heart conditions because the trek reaches 4600 meters of altitude. The route goes up and down many times, and summits three high Andean passes, one of them ominously named “Dead Woman’s Pass.”

The difficulty of this journey aside, the Inca Trail boasts a unique cross section of biodiverse microclimates and beautiful flora and fauna typical of the Andes and the Cloud Forest of the Amazon.

There are many ways to arrive to Machu Picchu, and your choice of route depends of your hiking skills. It is recommended to spend minimum two days in Cusco or the Sacred Valley to acclimate to the high elevation. Most travelers to the Andes suffers minor symptoms of “soroche” or altitude sickness. But this is normal, and you can take a pill, chew coca leaves, or drink coca leaf tea as remedy.

When to go? Cusco has a mild climate with temperatures fluctuating between 14-16°C, with warm days and cold nights. Cusco’s rainy season is from December to March, Machu Picchu has a semi tropical climate because it belongs to the “ceja de selva.” Machu Picchu’s rainy season is from November to March. The wettest months are January and February. The best months to visit for sunny weather are April to October. Check your schedule and come visit us.